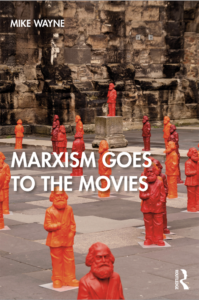 Marxism Goes To The Movies (Routledge 2020)

Introducing the key concepts and thinkers within the Marxist tradition, Marxism Goes to the Movies demonstrates their relevance to film theory and practice past and present.

Marxism is one of the few approaches that can bring together political, economic, formal and cultural analysis into a unified approach of studying film. The book examines how filmmakers, who have been influenced by Marxism, have made some of the most significant contributions to film culture globally, and provides historical perspective on the development of Marxism and film.

“Due to its wide-ranging focus on film production, distribution, exhibition, and reception, Marxism Goes to the Movies will   serve as a core text in many film history and theory courses that want to relate the central ways in which film structures our relationship to the world and serves as a primary terrain where social change happens.”

‘Very simply, the best single volume introduction to Marxism and film. Undogmatic, critical and nuanced, it leads the reader through the evolving ideas and practices necessary to make sense of the films that surround us, the industry that produces and sells them, and the audiences that enjoy or endure them.’

Mark Bould, University of the West of England

‘Mike Wayne’s book is a masterful synthesis not only of film theory over the century and a quarter of its existence but of aesthetic theory, as well as being acutely aware of the overlap between the two and political economy.

The book’s breadth of individual films and film movements is wide, encompassing British realism, Latin American anti-imperialist films and Marvel’s Captain America. In this time of raging inequality, of zero-interest rates and climate devastation and plunder, Wayne’s call to materialist analysis and action could not be more relevant.’

Dennis Broe, Birth of the Binge: Serial TV and The End of Leisure

‘In his relatively short book Mike Wayne manages to cover the many different facets of the relationship between Marxism and film, including film production, distribution, aesthetic form and questions of realism, drawing on and adding to the work of a number of historical figures, such as Raymond Williams and Gramsci. Marxism Goes to the Movies is an indispensable source’