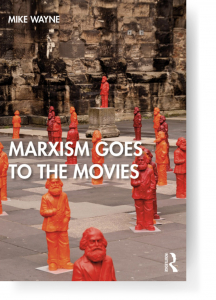 Marxism Goes To The Movies

‘Very simply, the best single volume introduction to Marxism and film. Undogmatic, critical and nuanced, it leads the reader through the evolving ideas and practices necessary to make sense of the films that surround us, the industry that produces and sells them, and the audiences that enjoy or endure them.’

Mark Bould, University of the West of England

Introducing the key concepts and thinkers within the Marxist tradition, Marxism Goes to the Movies demonstrates their relevance to film theory and practice past and present.

Author Mike Wayne argues that Marxist filmmaking has engaged with and transformed this popular medium, developing its potential for stimulating revolutionary consciousness. As the crisis of capitalism deepens, this history and these resources are vital for a better future. Marxism is one of the few approaches that can bring together political, economic, formal and cultural analysis into a unified approach of studying film, and how films in turn can help us understand and even critically interrogate these forces. The book examines how filmmakers, who have been influenced by Marxism, have made some of the most significant contributions to film culture globally, and provides historical perspective on the development of Marxism and film. Each chapter covers a broad theme that is broken down into sections that are cross-referenced throughout, providing helpful navigation of the material.

Clear and concise in its arguments, this is an ideal introduction for students of Marxism and film, inviting readers to deepen their knowledge and understanding of the subject.